Home » Interesting People » Kevin Beares: The Small Business Apocalypse Has Been Rescheduled for Another Day
May 16, 2013

Kevin Beares: The Small Business Apocalypse Has Been Rescheduled for Another Day

Strategies for a Post-SBS World

Kevin Beares is the Community Lead for the Windows Server and System Group at Microsoft. Kevin is in charge of driving community interaction for the SMB space.

I caught up with Kevin at SMB Nation Spring at the Microsoft Conference Center. Kevin gets props for putting himself on stage and letting the entire crowd put their toughest questions against him. It was supposed to be an hour, but Kevin stayed more than two hours and was accompanied by Microsoft MVPs Steven Banks and Cliff Galiher, who did a good job of representing both the Microsoft perspective and the partner perspective. 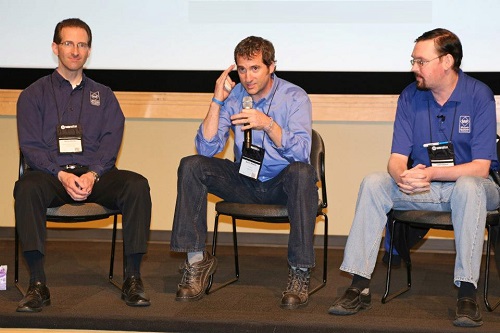 One of the first things Kevin pointed out to me is that there IS a product team that is still focused on the SMB space. The Home Server and Small Business Server products have been re-jiggered and the current SKU is Server Essentials. But the team still exists.

He did not say this, but the comment “Read into that what you want” allows me to read into it that there will be a new product or perhaps product line.

It’s kind of funny. Just a couple days ago I reported on the Small Biz Thoughts Blog that Frank Shaw from Microsoft was irritated by the negative feedback they’ve received over Windows 8. He basically said that feedback is good, but not too much.

I have always found that Microsoft is very willing to take feedback. Sometimes they sound a bit defensive and really just want to explain their position. But they do listen and they do take the message back to the development team.

Kevin Beares is doing a great job listening to the community and gathering their feedback. He is fully engaged on the Facebook Group that is discussing changes in SBS. See https://www.facebook.com/groups/131473643614130/. And rather than simply defending past decisions, Kevin did a great job on stage echoing back to the community: “I understand your concerns about pricing ….” He also offered up a configuration strategy for putting Server Essentials and Exchange on the same box.

Listen to the interview and engage Kevin here:

– Download the Interview with Kevin Beares from Microsoft here.

The SMB Community Podcast is a thirty-minute interview format. We feature news, commentary, and interesting vendors.

A new episode drops every Thursday. Show notes are posted here. Also look for us on Stitcher or your favorite pod catcher.